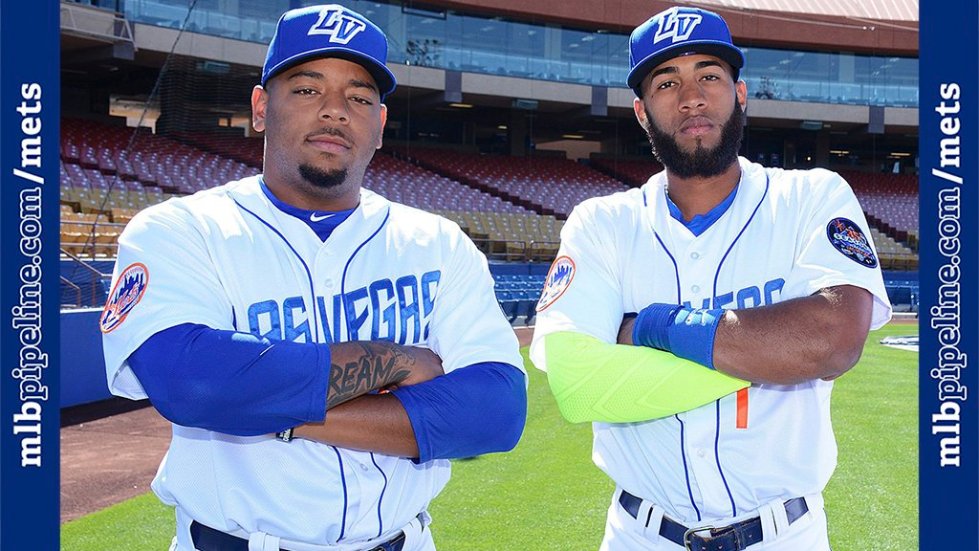 One way or the other (or possible both), the New York Mets have failed when I has come to their two highly regarded prospects, Dominic Smith and Amed Rosario.

Both came up through the Mets minor league system together. Both were considered, thought of and developed as middle of the line up hitters. Players that would routinely have 50 or more extra base hits a season. Rosario was compared to Carlos Correa and Francisco Lindor. Dominic Smith was thought similar to Prince Fielder or Paul Goldschmidt; a complete hitter, with the ability to get on base, and hit for power.

So far, neither have lived up to their billing. This raises serious questions about how the New York Mets evaluate and develop its young players.

Because of Amed Rosario’s perceive slugging ability, he hit mostly in the middle of the line up through the minors. He generally batted second or third, directly in front of Smith. His job was not to get on base, but to drive the ball. His opportunities to use his speed was limited. He rarely stole bases. Being on first base, with Smith batting, Rosario would need to stay put, to keep the hole open between first and second base for the left handed hitting Smith. It would also be a poor move to get thrown out trying to steal second base, only to have Smith get an extra base hit on the next pitch.

Smith’s scouting reports all gave him top numbers for raw power. That raw power showed in batting practice, as Smith could crush the ball. The power did not find its way into game situations however, as Smith never hit as many home runs as you would want from a clean up hitter. This is often typical of young hitters. It sometimes takes a player a while to understand how to use his power in a game. Despite his lack of home runs, Smith batted over .300 in four of his five minor league seasons. This includes a very healthy career on base percentage while in the minors.

A common express that managers tell young players is “Don’t change what got you here”. If something worked for you in the minors, and it was good enough to get you to the majors, just keep doing that.

Dominic Smith was in the majors for ten days when the Mets decided he needed to change his swing, to be able to lift the ball more. His solid contact skills, his ability to get on base, to hit doubles, gap to gap, were not enough for the Mets. They had Smith billed as their clean up hitter of the future, so he needed to hit more home runs.

During that late season call up in 2017, Smith hit nine home runs. All of them, in a short time. But with his new swing, his major league batting average never rose above .200. Smith has been up and down, back and forth between the majors and minors this whole season. His major league career has never really taken off as of yet, and is marked with stops and starts.

Amed Rosario has struggled in his first full season an a major leaguer. Sometimes, he looks great, and can drive to ball to both gaps. Sometimes he makes fantastic plays defensively. But of those are sometimes.

Sometimes he swings at three straight pitches, all out of the zone, and takes a seat. Sometimes he makes even routine plays look beyond his skill-or worse- his interest level. The Mets have said they do not want to take away the aggressiveness of a young player. Amed will be 23 in December. Atlanta Braves second baseman Ozzie Albies is 22 and currently is slugging over .500.

Why have these two young Mets players struggled, while other young players around the league seem to be thriving? Is it poor development? Poor player evaluations? Or is it both?

The New York Mets groomed Dominic Smith to be a heart of the order power hitter. That was fine for the minor leagues. Looking at his numbers, and his swing, he seems more suited as a number two hitter in the majors. The Mets thought of him as someone that could hit 30 home runs. He might be that player eventually, but he is not there yet. He could still hit 15 home runs with 30 to 40 doubles. Less Prince Fielder, more Daniel Murphy. He seemed to have the ability to make strong contact to all fields, with a shift proof swing where a slash line of .300/.380/.500 is not that crazy to think of. Those would also be some of the best numbers on the Mets current team.

Amed Rosario was brought up by the Mets as a power hitting, athletic shortstop with superb fielding ability. He as shown very little of that. His athleticism has allowed Rosario to get away with many bad habits over the years. The Mets have either ignored or rewarded these bad habits. In the field, Rosario takes lazy routes to the ball. Or at least inefficient routes. In the minors, his athletic ability has made up for that. His coaches seem happy with the results, rather than bother examining the process.

There are times when the ball does find the barrel of Rosario’s bat, and it explodes back from where it care. Those instances you can see Rosario’s potential, and his athleticism, his power. Those times have happened less than 20 times this season.

Rosario was developed as a two or three hole hitter. He was never taught to bunt. Not the lead off hitter that his skills clearly speak to. He does not know how to steal bases or read pitchers. The Mets wanted Rosario to learn to drive the ball for extra base hits, not bunt for singles. While bunting has outlived much of its usefulness, a player with Rosario’s speed and athleticism could bunt for a single, then steal second base. On second, just like if he ripped a double into the gap.

Power can come later in a player’s development. Speed usually diminishes as a player ages. Speed early. Power late. The Mets seemed to have skipped a step.

There are young players all across Major League Baseball having significant impact for their respective clubs. The New York Mets have two highly regarded young players in Amed Rosario and Dominic Smith. Both players seem to be held back by poor evaluations of their skills sets, and poor development in the minor leagues. If the Mets are going to have long term, lasting success, they need to improve both areas, before it is too late.