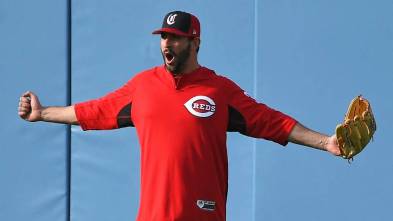 Matt Harvey, at times, can be a jerk. Being a jerk has led to issues both on and off the field for Harvey. All of which have contributed, as least in part, to his under performance on the field.

Matt Harvey being a jerk is not the fault of anyone but Matt Harvey. The coaches, the front office, and ownership are not responsible for the personality defects of Matt Harvey.

It is not their fault. Not the Wilpons. Not Sandy Alderson. Not Mickey Callaway. The New York Mets as a whole, have sucked in 2018. And there is very little we can do about it right now.

It is not the Wilpon’s fault. We are going to use the term “Wilpons” to cover all of ownership. We all know the Wilpons personally own less than 20% of the New York Mets organization. But we all need an enemy. Someone to hate. Someone to blame when things go bad. We all need an enemy that personifies pure evil. And it is easier to say “Wilpons” when looking for that enemy, than it is to say “Sterling Equities”.

So the WILPONS are not to blame. Not this time. They opened the wallets. Free agents were signed. Players the fans wanted we added to the team. The WILPONS listened to the fans, and fired head athletic trainer Ray Ramirez. They even bought a triple A franchise in Syracuse, New York. No more cross country flights for minor league call ups next year.

Nothing that the Wilpons did or did not do caused this mess of a team in 2018.

Addison Reed was over used by the Mets the last two seasons. That is why it was hard to trade him at the deadline last year. He is a ticking time bomb. Luckily, someone else’s time bomb. He also has a negative WAR on the season as of right now.

Bryan Shaw: The relief pitcher signed a massive three year deal (with a $2 million buy out on year four), with the Colorado Rockies. He now has an ERA of 7.57 and just hit the disabled list. Speaking of negative WARs— how does -1.7 out of the bull pen sound?

Not the Shaw New York Mets fans wanted; the Shaw they deserve

The Rockies, it looked over the weekend series against the Mets, like a bigger mess than the Mets, with little hope of improving anytime soon. Remember all of those stud starting pitchers they had? The ones on those strict pitch counts? Where did they go? Jon Gray just got sent to triple A.

Sandy did add relief pitcher Anthony Swarzak though. Last season he had an ERA of 2.33 and a WAR of 2.8. It is not Sandy’s fault he got hurt before the season even started.

Sandy signed Jay Bruce. To a contract less than half of what Bruce originally asked for. Bruce signed with the Mets for more than what the San Francisco Giants offered. This was not a case of the Mets being cheap.

It is not Sandy Alderson’s fault that Jay Bruce sucked so far this season. Bruce had one of his best seasons as a professional in 2017. No one, including Sandy could have predicted Bruce would fall off so much, from even his career average numbers.

Sandy could also not predict his two opening day starting catchers would both hit the disabled list within 12 hours of each other.

Sandy could have signed Lorenzo Cain. Could have traded for Dee Gordon. Yes. Those deals could have helped. We talked about the benefits of adding Gordon HERE.

How much would they have helped?

Sandy did sign Todd Frazier. As championed by us HERE and HERE.  All that was written is still true. Plus glove. Plus strike zone command that leads to a plus on base percentage. Plus power. Combined, makes him a great role player in the Mets.

Frazier landed on the disabled list for the first time in his career. That is not Sandy Alderson’s fault.

When Frazier returned, the Mets were already a sinking ship, unable to produce runs. Unable to get more than a couple of hits each night.

He took that personally, and tried to carry the team. That is what leaders do, right? He tried to force runs to score. Try to force the ever elusive 6 run home run.

It is not Sandy Alderson’s fault players began to press. It is not Mickey Callaway’s fault his players started to press. More on Callaway in a bit.

It is not the manager’s fault. Mickey Callaway has been a steady presence in the dug out. He has worked with the pitching staff, instructing them to throw more curve balls and less sliders. More four-seam fastballs up in the zone. Less two-seamer low in the zone. To pitch inside more.

It has done wonders for Zach Wheeler and Steven Matz.

It is not Mickey Callaway’s fault that Hansel Robles still points to the sky on the home run he has just served up.

It is not Mickey Callaway’s fault his batters have failed to make the same adjustments his pitcher have made.

It is not Mickey Callaway’s fault that Wilmer Flores has one home run against lefty pitching this season. Or that he is slugging a minuscule .333 against south paws. Last year Flores slugged .553 against them.

It is not Mickey Callaway’s fault when a relief pitcher leaves a 0-2 pitch up in the zone. Or can not get an out working two days in a row.

The 2018 season has been a rough year for the New York Mets. And it is not even the All Star break yet. There is only one place to look for answers. The players on the field. Players were brought in to do specific jobs, and they have been failing at those jobs, each and every one of them.

Fans can blame the manager. Can blame the front office. Can even blame the owners. But the real blame goes to the players in the field, all of which have been preforming well below their career averages. If the players were preforming at or near their career averages, and the Mets record and on field performances was the same, then yes, look off the field for the problems. That is not the case with the 2018 New York Mets.

The players are the ones to blame for this mess. Where do the Mets go from here?

Fearless Baseball is ad free. Please help us keep it that way