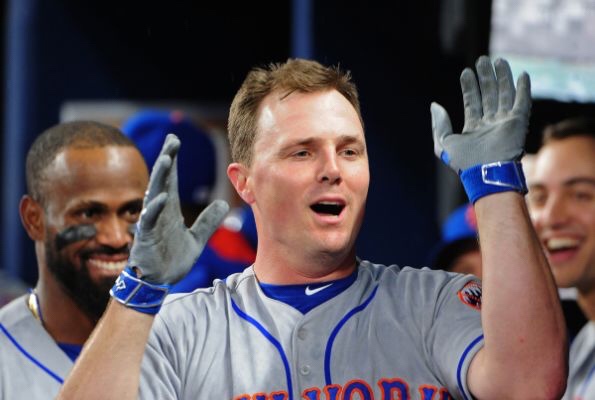 And just like that, a whole mess of Mets fans stepped back off the ledge of what ever building they were about to jump from. Yes, with the signing of Jay Brice (3 years, $39 million) the Mets Hot Stove finally has some heat to it.

So here’s what the new potential line up looks like, and why it looks the way it does.

Mets didn’t sign Lorenzo Cain. They didn’t trade for Dee Gordon (A case for Dee Gordon). Or Ian Kinsler. They still don’t have a true lead off hitter. Conforto proved he could handle that job last year, and he’s the new wave of lead off hitters. Similar to Springer in Houston, Blackmon in Colorado and how Cleveland used Carlos Santana when Callaway was the coach there.

Cabby is a pro, and should work well batting 2nd

Cespedes and Bruce are traditional power hitters. Do big seasons await both of them?

Wilmer Flores has shown what he can do against lefties (1.093 obs in 2016) He also developed well against righties, too. With a slugging percentage pushing .500 the last 2 season, he should do well in the 5 hole. Wilmer can also slide over to first base, against tough lefties, to give Dom Smith a break.

Of course, Todd Frazier would look good hitting 5th for the Mets here, too.

A case for Todd Frazier, part 1

A case for Todd Frazier, part 2

Rosario will eventually hit higher in the line up. How high depends on how and how quickly he develops.

Batting 6th should give him room to grow.

Rosario would also be an ideal 9th place hitter, adding a 2nd lead off hitter. Joe Madden has said the 9th spot is a great place to develop a young hitter.

Does a rookie manager have enough in him to make a bold move like that?

With Rosario hitting in front of him, it would open the right side of the infield for Dominic Smith. Smith is also a patient hitter, and used to hitting behind Rosario. This should let Rosario steal bases, and provide RBI opportunities for Smith.

The catcher spot hits 8th. And that is all there is to say about that here.

Plawecki and Lagares seem assures a spot, and rightfully so.

The last few spots are up in the air. Callaway has stated he likes 13 pitchers on the roster. This means 4 bench spots.

Is Rivera healthy enough to start the season? Reyes is the only one that can back up short stop. And Nimmo showed how well he was pitch hitting and coming off the bench at the end of 2017.

Fearless Baseball is ad free. Please help us keep it that way